I’m quite happy with the books I read this month. I found my first 5-star read of the year and I reread a book I loved! I didn’t get to all the six books from my O.W.L.s TBR-list, but I did read four of them. To become a Trader of Magical Tomes I needed to get O.W.L.s for Ancient Runes, Charms, History of Magic and Transfiguration. Here are my thoughts about the books I read for those subjects.

Soulless (Parasol Protectorate, #1) by Gail Carriger – 5 stars
This book was just as amazing as I hoped! It’s a nice mix of fantasy, steampunk and romance. The story is set in an alternative version of Victorian London where werewolves and vampires are normal citizens. It’s an interesting setting that was well executed. The book starts when the soulless Alexia Tarabotti was attacked by a vampire. By doing this he totally broke all standards of social etiquette. Alexia accidentally kills him with her parasol. While unexpected vampires are appearing, and expected vampires are disappearing, she is determined to figure out what is happening. Alexia really is a great main character. She is intelligent, practical and independent. She reminded me of Miss Fisher from Miss Fisher’s Murder Mysteries, a tv series you may have seen on Netflix. I also loved the writing style of the book. It’s witty and fits the story perfectly.

Ancient Runes – Heart rune: heart on the cover or in the title

Tash Hearts Tolstoy by Kathryn Ormsbee – 4 stars
I wish I would be able to really watch Unhappy Families! It’s the fictional web series made by Tash and her friends, but it totally feels like something I can actually look up on YouTube. Unhappy Families is a modern adaptation of Anna Karenina, one of Tash’ favourite books. I liked the references, but you can certainly enjoy this book without knowing anything about Tolstoy. What I loved most about the book was Tash herself. Kathryn Ormsbee really shows Tash’ personality instead of just telling about it. For example, I loved to read that Tash is vegetarian. This isn’t just mentioned once, it is used a few times in the story. I think small details like this make a character feel more real. The writer also did a great job in describing how Tash found out that she is ace and how she deals with this. I knew about asexuality and read about it on Tumblr, but I didn’t really realize how hard it can be. Of course this is just one perspective, but the book helped me to better understand the struggles of aces.

My Brilliant Friend (The Neapolitan Novels, #1) by Elena Ferrante – 3 stars
For this prompt I actually wanted to borrow a book from my library. Since the library is closed at the moment, I looked for a book with a white cover at home. My Brilliant Friend was a book I wanted to love, but I ended up liking only parts of it. I liked the Italian setting. The descriptions of Naples and the people living there in the 1950s are very vivid. It was also interesting to see how their home town influences the personality of the characters. The characters themselves were a drawback for me. I do think they are well-written. Yet not very likable and hard to emphasize with. Central in the book is the friendship and rivalry between Elena and Lila. This first book in the series describes their childhood and teenager years. Elena is the narrator of the story. She idolizes Lila, who may be smart, but also is mean and quite egoistic. I’m not sure how to describe Elena, because her personality seems to be based on Lila. I really don’t understand why Elena wants to befriend Lila, and even wants to resemble her. Because I wasn’t able to connect with the main characters, I lost my interest in the story. 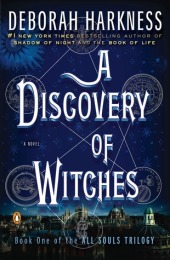 A Discovery of Witches (All Souls Trilogy, #1) by Deborah Harkness – reread
I read this book four years ago and it became one of my favourite reads of 2016. I wasn’t sure if I would love the story as much as I did then. It turns out that I do! From the start I admire the vibes of studying ancient manuscripts in an old library in Oxford. If becomes even better when we are slowly introduced to a magical side of our world with witches, vampires and deamons. Diana is the descendant of a powerful witch, but refuses to use her power. Everything changes when she finds an ancient, magical manuscript. Every creature seems to want it. One of them is Matthew Clairmont, a vampire who is not only interested in the manuscript, but also in Diana herself. While reading the book, it’s clear that the writer is a historian. She does a wonderful job in describing the historical events Matthew lived through. And I totally forgot how much of an amazing rollercoaster the second half of the book is! Since the first time I read this book, I wanted to continue the trilogy. Wyrd & Wonder in May seems the perfect opportunity to do so.

So I’m on my way to become Trader of Magical Tomes! In August I will continue this Magical readathon with the N.E.W.T.s. Keep an eye on G from Book Roast for updates.