Wyrd & Wonder has begun! I already finished my first fantasy book of the month: Spellbook of the Lost and Found by Moïra Fowley-Doyle. This book tag seems a good way to kick off Wyrd & Wonder on my blog. I got the Fantasy Bucket List Book Tag from Imryl on One More. It seems to be originally created by Toast Dragon Fantasy on Youtube.

A fictional world that you would like to tour

I would love to visit the Realm of the Elderlings from Robin Hobbs books. Especially Trehaug in the Rain Wilds would be wonderful to visit. All buildings in this city are constructed in the trees connected by hanging bridges. This tour would also give me the opportunity to travel with a Liveship, a living ship that is able to speak through its figure head. And I may also spot a dragon!

Fantastica, the magical world from The Neverending Story is also high on my list.

A specific place that you would like to visit

I could think of many fictional places, but the one I (literally) dream about visiting is Hogwarts. I would love to roam around, look through the books in the school library, see the Hufflepuff common room, look for magical plants in the school gardens and maybe find a hidden room. 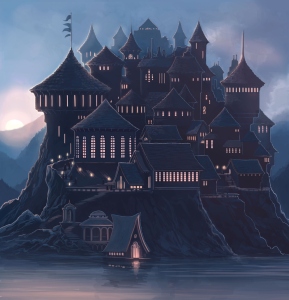 That would be Lazlo from Strange the Dreamer. He is very friendly and soft-hearted and seems easy to talk with. I would love to listen to the many amazing stories he has to tell.

Just one event? There are two I would like to participate in.

The first one is the Warlord’s Birthday in Loramendi from Daughter of Smoke and Bone. This is a huge masked ball while the whole city is illuminated by thousands of lanterns. I could hide myself behind a mask and attend this wonderful feast.

The second event is Caraval, the once-a-year performance where the audience participates in the show, from the book with the same name.

Initially, the only fantasy sport I could think of was Quidditch. Although I like to read about it, I wouldn’t necessarily want to do Quidditch myself. I’m a bit afraid of heights and actually not a fan of sports involving a ball (and Quidditch has five of them…). But then I realized that gaming is also a sport and certainly an activity. And I would love to play Warcross! This is a video game made up by Marie Lu where the players have to hunt down artefacts in the most amazing worlds. The book is actually science fiction rather than fantasy, but I think it totally counts.

I’m actually not interested in weapons. Yet, there is one thing I like that strictly isn’t a weapon, but could be used as such. I’m talking about a wand. I would love to be able to use one!

Many bloggers who did this tag answered this question with Hermione’s timeturner. But I really wouldn’t want to mess with time. I would rather have an alethiometer from His Dark Materials by Philip Pullman. This looks like a compass with a lot of symbols on in. You can ask an alethiometer questions and it will give you a truthful answer. It would be very useful when I have a difficult decision to make. 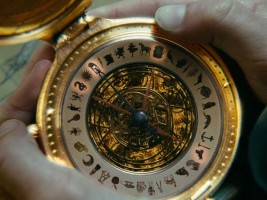