A few years ago there was a time when I watched a lot of disaster movies. Most of them are actually quite similar. The movie usually starts before the disaster. The main characters are journalists and/or experts in tornados/earthquakes/the disaster in case. Often they try to warn others about the disaster, but for some reason no one listens to them. It is discovered too late that they were right. Family always plays an important role. During the disaster they either try to stick together or are looking for a certain family member. Interesting enough many of these movies are about divorced parents.

Despite or maybe due to these similarities, I like disaster movies. It’s an advantage that I know what I can expect. The movies are always exciting with brave characters that fight for their life. For me they are encouraging and reassuring. If the characters in the movie can survive a terrible disaster, I also will get through whatever I am struggling with.  This is my top three:

Flood (2007)
Most disaster movies are set in the United States. It was a breath of fresh air to find one set in London. At the start of the movie a storm surge is detected. Too late forecasters realize the storm heads toward London. Furthermore a professor warns that the water will break through the Thames Barrier. In just a few hours big parts of London will be flooded…

San Andreas (2015)
The plot isn’t really original, but I loved the characters in this movie. The main characters are helicopter-rescue pilot Ray, his ex-wife Emma and their daughter Blake. When a massive earthquake devastates Los Angeles, Blake gets trapped. A kind boy and his younger brother save her. The three of them try to reach Blakes parents. Meanwhile Ray and Emma are attempting to get to their daughter.

10.5: Apocalypse (2006)
I think this was one of the first disaster movies I watched. This movie stars with a disaster: an earthquake with a magnitude 10.5. It is the trigger for a massive tsunami, the awakening of an extinct volcano and more disasters. Geologists don’t understand why all these kinds of rare seismic events are happening. But Samantha Hill remembers a crazy theory from her father about the movement of the Earth’s tectonic plates. The problem is that her father no longer works as geologist. He is currently a poker player, stuck in a casino in Las Vegas that sunk in the ground due to a sink hole. He may be able to stop all the disasters, if he survives…

There are some movie adaptations I absolutely love and some I despise. I compiled a list of three movies I hope to never see again and three that were instant favourites. 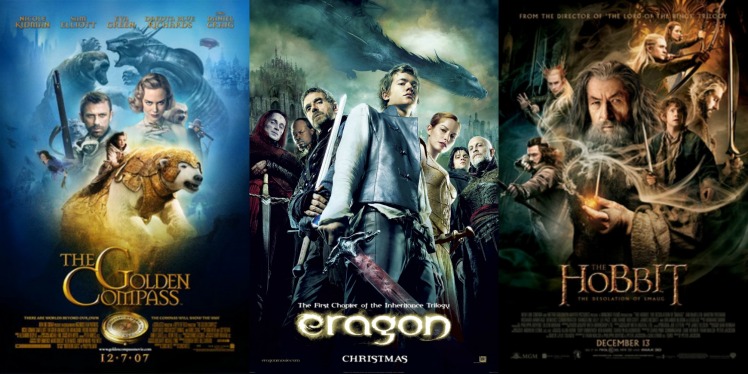 They are the reason I am a little afraid when I read that one of my favourite books is going to become a movie. I have accepted that movies and books cannot be identical, but the producers of these movie adaptations made a little too much mistakes:

The Golden Compass (2007)
This movie was such a disappointment. It was not the fault of the actors, they did a good job. But the producers “forgot”the religious parts of the book, and that is NOT something you can just leave out. I am also really annoyed by the fact that Miss Coulter has blond instead of black hair. Why didn’t they give Nicole Kidman a wig?

A few months ago I heard that His Dark Materials will be adapted again, but this time as a tv-series by the BBC. I really hope they will do a better job!

Eragon (2006)
I think it is generally agreed that this movie was a big fail. Important parts of the book were left out and the actors weren’t that great. The positive thing is that they did not try to adapt the other parts of the book series.

The producers of these movies did an amazing job. This is how you make a movie from a book:

Matilda (1996)
One of the very few movies that I think is better than the book. Every time this movie is on television I watch it! Even though I have seen Matilda at least ten times (probably more).

The Hunger Games: Catching Fire (2013)
The producers stayed close to the original story, acting was good and the movie was exciting to watch. I still haven’t watched Mockingjay part 1 en 2, but I have high expectations.

The Lord of The Rings (2001, 2002, 2003)
I really admire The Lord of the Rings. It is a wonderful story that inspired many other fantasy stories. Middle-Earth is high on my list of fictional words I would like to visit, and the producers did a great job of portraying it. The actors are also well-chosen. Nobody could play a better Gandalf than Ian McKellen!